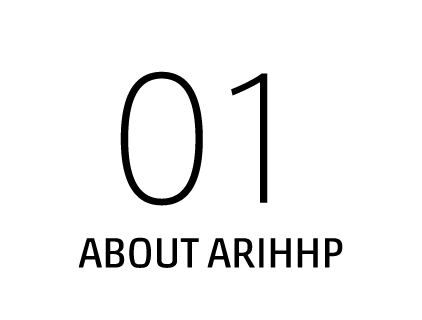 The Advanced Research Initiative for Human High Performance (ARIHHP), an affiliate of the Institute of Health and Sport Sciences, University of Tsukuba, is advancing next-generation health and sport science that aims to optimize human performance.

Utilizing the University of Tsukuba’s outstanding research base in health and sports sciences, ARIHHP is engaged in the promotion of next-generation sports sciences through the introduction of cutting-edge life and cognitive science research, and innovative sports technologies. Based on the results of these activities, we are working to help optimize the total human performance, which is achieved by the integration of mind, technique and body (shin-gi-tai), through a program consisting of exercise, nutrition and rest (sleep), as well as sports techniques and equipment, which we are integrating to develop and apply comprehensive exercise and training programs. We also aim to contribute our results not just to athletes but to society at large by proposing policies and engaging in public physical education programs and training of human resources. 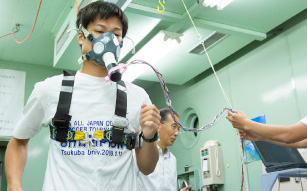 The logo of ARIHHP represents “Supercompensation”, a theory that describes the fundamental process of exercise training on the human body.

What is Human High Performance?

Up to now, science and technology research has assumed human physical performance to be low, and has developed by supporting, expanding, and supplementing performance. However, although human performance may have been low, sports science has proven that it can be enhanced with the proper training. Human performance is determined not only by physical strength such as muscle strength and endurance, but also by a variety of other factors such as cognizant performance (techniques, equipment, metabolism, resistance to stress, attention, and judgment), and communication abilities. The aim of the Center is to promote physical and mental activities at the individual and societal levels by making a comprehensive, multi-faceted verification of these performances based on mental, physical and technical aspects, in order to optimize physical activities and performance (Human High Performance: HHP) in a comprehensive manner to make people healthier and more robust. 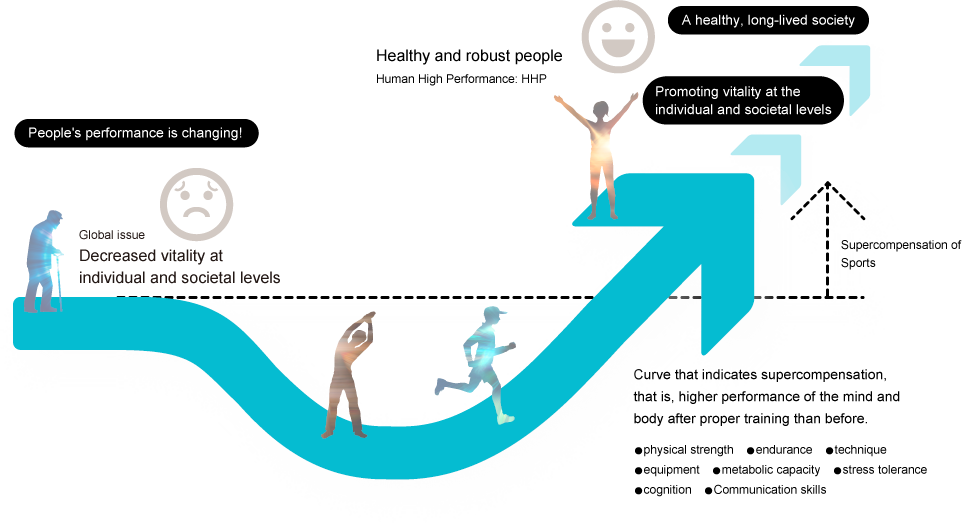 For the past 15 years, we have worked to bring physical education and sport sciences up to international standards, and to contribute to society by building a core of instructors at our institute. We have also acquired and promoted major governmental projects such as the 21st Century Centers of Excellence Program by the Japan Society for the Promotion of Science (JSPS) and special research projects for the Ministry of Education, Culture, Sports, Science and Technology (MEXT). Now that the Japanese government has drawn up a plan for promoting sports activities as a foundation for helping our aging society to stay healthy, it is time for us to use our prowess as an academic institution to advance these policies. The worldwide spread of hypodynamia, the lack of mental and physical stamina, is becoming a serious problem. Up to now, associated science and technology has developed on the assumption that humans have weak abilities that should be supported, enhanced and supplemented. However, we believe our next-generation sport science research has demonstrated that people have naturally high potential that can be maximized through innovative training with an optimized balance of exercise, nutrition, and rest (sleep). To achieve this mission, we at ARIHHP will continue to carry out robust basic research in collaboration with numerous universities and research institutes from Japan and around the world that share our concepts.

The director of ARIHHP supervises the organizational operations, holds meetings of the Review Board for Research Proposals, and coordinates internal and external organizations. Important matters of administration and management are discussed and decided by the steering committee, which also deliberates on and selects research topics submitted by the public. ARIHHP has its own administrative organizations, including General Affairs, Accounting and Budget Management, and Public Relations to support collaborative research, and a Research Support division to handle the procurement of external funds, maintenance of facilities/infrastructure, and collaborative research operations. A portion of the expenses for joint research activities and organizational activities is distributed to research representatives based on decisions of the Steering Committee. The Review Board for Research Proposals classifies and examines the applications, and reports to the Steering Committee. 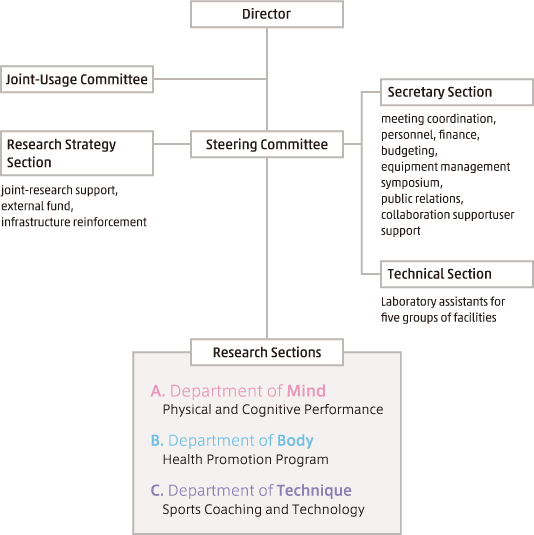 Please see here for the evaluation on ARIHHP Activities by the Evaluation Committee.

In response to requests from the nation, the Institute of Health and Sport Sciences at the University of Tsukuba has taken a leading role in physical education, health and sports sciences in Japan, promoting physical fitness and health of the general public, and contributing to the training of athletes in competitive sports. Since the time when Jigoro Kano was the principal of Tokyo Shihan Gakko, the school has accepted many students from overseas, and has nurtured leading physical education personnel both at home and abroad, in Asia and elsewhere. ARIHHP was established with its roots in the National School of Gymnastics, National Institute of Health and Physical Education, and Tokyo University of Education’s Institute of Sport Sciences (1960-1977). Despite the changes in name and location, we will carry on the spirit of the “paulownia leaf” emblem by leading the next-generation health and sports sciences through collaboration with industry, academia, and government. 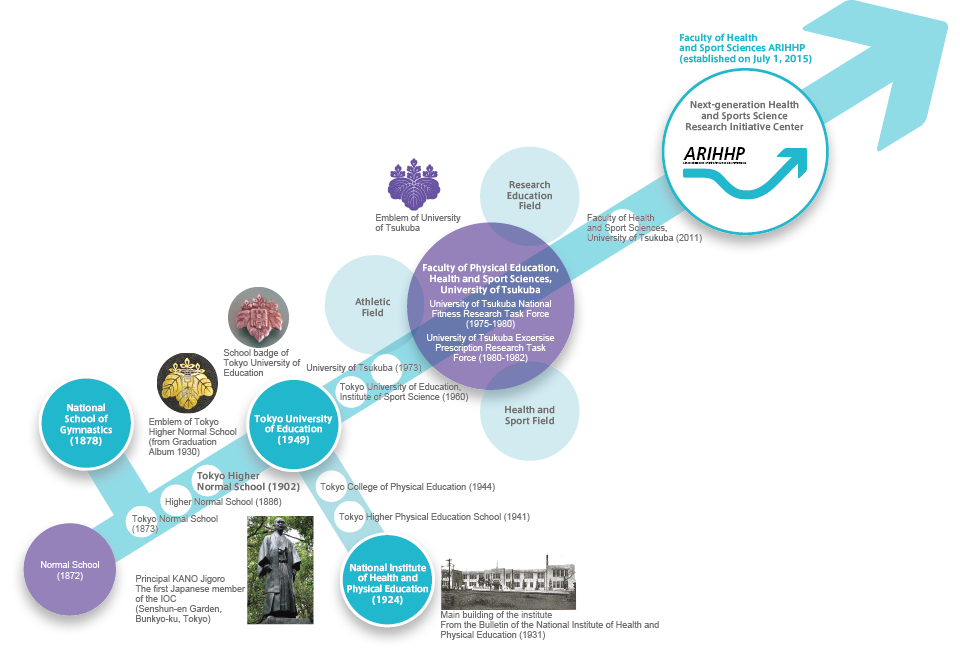 Institute of Sport Sciences at Tokyo University of Education, or “Supo-Ken” as it was popularly known, came into being in 1960, four years before the 18th Olympic Games in Tokyo (1964). Sport Physiology, Coaching Studies, and Kinematics were the main areas of specialized study, and research flourished. Many of the research results were published in academic journals in such related fields as physical education and physical sciences, as well as in our original journal, “The Bulletin of the Institute of Sport Science” (vol.1-14), which published a total of 76 original papers and 12 research documents. After seventeen years of research activities, Supo-Ken was integrated into the University of Tsukuba and closed in 1977. Half a century after Supo-Ken’s opening, we celebrated the birth of ARIHHP. As it grows to become one of Japan’s leading research centers in the 21st century, we hope that ARIHHP will continue to improve and develop through such activities as conducting cutting-edge research, nurturing human resources and broadening the scope of international exchanges.

When the application was first made to establish Supo-Ken with the Education Ministry, the plan was to have 5 departments (Sport Psychology, Sport Medicine, Kinematics, Coaching, and Statistical Research) and 39 staff members (5 professors, 5 assistant professors, 10 research assistants, 5 teaching assistants and 14 others, i.e., administrative staff, nurses, etc.). However, what actually materialized were 3 departments and 9 staff members, most of whom were also working in other departments. 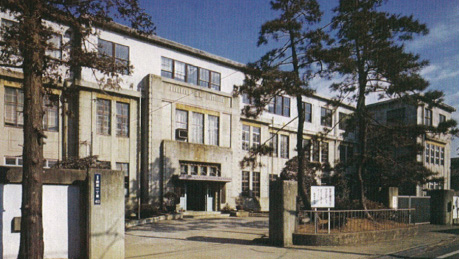 The first director of Supo-Ken was Reiji Natori, a renowned physiologist internationally known for his “Natori fiber.” In the first issue of the Institute of Sport Science Bulletin (1961), Professor Natori and his collaborators developed a “comprehensive research” approach intent on overcoming the boundaries between academic divisions to work together for a common purpose. He and 15 of his colleagues took an extremely multidisciplinary approach to analyzing motor skill mechanisms such as the crouching start in short distance races, table tennis strokes and hip throwing techniques in Judo. Each division conducted a wide range of research, from basic research in exercise and physical strength to practical research in sports such as track and field, judo, sumo, skipping rope and mountaineering. The institute made a substantial contribution to physical education and competitive sports, fostering a large number of sports researchers and coaches, and supporting the Tokyo Olympic games in 1964. In the final issue of the “Institute of Sport Science Bulletin,” (vol.14, 1976), Professor Takeo Tawa (soccer, coaching), then director of Supo-Ken, shared his thoughts on the University of Tsukuba and the closing of the institute.

Toward the Establishment of ARIHHP


Recently, the University of Tsukuba proceeded a number of projects that contributs to solve the global issues, such as “declining vitality of people and society”, by sports.


For the four years – from the academic year 2010 to 2013, “Sports Science Innovation for the Development of Tough Body and Mind: Introduction of Cognitive Neuroscience” was accepted, as a Ministry of Education, Culture, Sports, Science and Technology special education and research fund project, “Reinforcement of Multiple Academic Research Systems by Advantage of University”, Body and Mind Integrated Sport Sciences: BAMIS project was proceeded. In this project, integrating mind, skills and body, we promoted scientific researches how physical movement develops the body and mind with vitality and pliancy. In particular, the purpose of the project was to develop an innovative sports program aimed to nurture mind strong enough overcome stresses and tacle obstacles, by investigating the common essence of Budo (martial arts), such as Judo and Kendo, and of oriental bodywork, such as Yoga and meditation, and studying the effects of these common essences by using state-of-art techniques in cognitive neuroscience and by collaborating different reserch groups. To accomplish the goal, translational reserches in physical activities that bridge basic researches to application of those was held. In addition, we have created a new scientific field, called Body and Mind Integrated Sport Sciences: BAMIS by integrating different academic fiels of sports medicine and science, brain science, cognitive engineering, psychology, and physical culture. For more information on BAMIS, please see here.


The achevement, during the four-year era of BAMIS, such as high level basic research publication, application of those results, and patent acquisition was highly evaluated, for the next five years – from the academic year 2014 to 2018, “Global Initiative in Health and Sport Sciences for Human High Performance” was accepted, as a Ministry of Education, Culture, Sports, Science and Technology special education and research fund, “Internationally Outstanding Program in Education and Research: the Latest Biology and Cognitive Brain Science”, Human High Performance: HHP Project was proceeded. In this project, for developing and implementing basic technology of Human High Performance, establishing an internationally excellent joint research center by implementing the latest biology and cognitive brain science. In particular, in parallel with promoting advanced research project that integrats different research fields, a doctoral degree program in next-generation health sports sciences, which includes different research fields, and which integrates researches and application of those, was established. For the following three years – from the academic year 2019 to 2021, succeeding HHP Project, as “Interdisciplinary HHP Project”, we have been continuously promoted integration of the latest physical, engineering and medical sciences. For more information on HHP Project and Interdisciplinary HHP Project, please see here.


Then, the achievement of HHP Project led the establishment of Advanced Research Initiative for Human High Performance: ARIHHP in July, 2015. 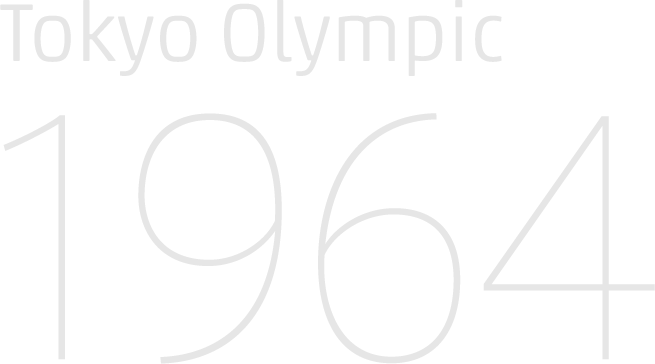